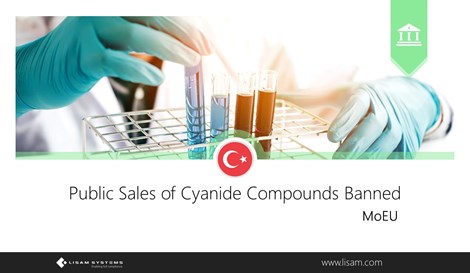 Turkey's government moved to ban sales of cyanide compounds to the public in the wake of suicides using the deadly substance.
Changes to the regulations on sales of cyanide require an end-user certificate, said the Environment and Urbanization Ministry.
Under the regulations published in Turkey’s Official Gazette, sales of a host of substances are now controlled, including hydrogen cyanide, hydrocyanic acid, calcium cyanide, and cadmium cyanide.
Under the rules, cyanide compounds will not be placed on the market for sale to the public through the internet or in any electronic medium, and all packaging will include the phrase “For professional and industrial use only.”
The mandatory end-user certificates show what company used the compound, in what amount, and for what purpose, and that it will not be placed on the market for public sale.

Turkey is quickly proceeding with the adoption of new legislation to restrict cyanide for public use under its KKDIK (Turk-REACH) Regulation.

The measure was prompted by a spate of suicides by cyanide poisoning in recent weeks, the Ministry of Environment and Urbanisation (MoEU) said.
KKDIK consultation

On the other hand, the Turkish ministry plans to open a public consultation on 43 candidate list substances in KKDIK's Annex 14 – which also mirrors the REACH candidate list – during 2020.

It has not confirmed a specific date for this.